Navaratri 2019 is starting on September 29. I have posted Navaratri combo food post few years back. That post will be a combination of Tiffin items and sweets. Few of my friends and readers asked me to post dry sweets and snacks combos. Many times when you have sudden guests or if you are a working women, can plan and make this in advance and pack it for guests who come for Navaratri. We used to do friday Satsang at our home in Chennai, and those days, we used to pack murukku and nei urundai for guests who come for the bhajan. So curated a Navaratri combo sweet and snack, along with a Sundal.
Do check out my complete collection of Navaratri recipes, Navaratri Sundal and payasam recipes.
Weekend Lunch menu will be posted from next week. 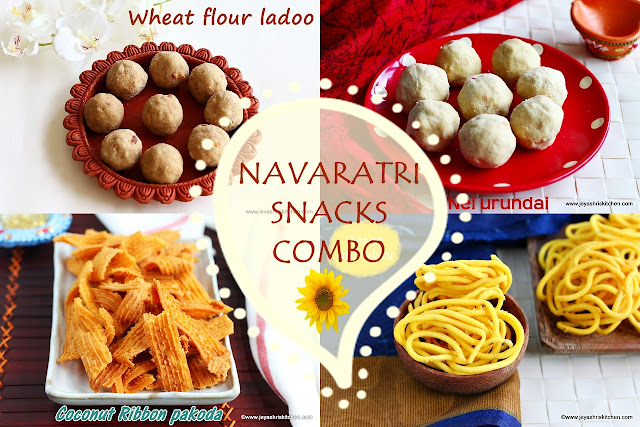 Capsicum Sambar recipe| Kudamilagai sambar| Paasi paruppu sambar, recipe with step by step pictures, no onion no garlic version of Sambar, pairs well with idli, dosa, pongal and also with rice. We usually add ladies finger, drumstick, small onions, brinjals, Pumpkin to Sambar. During my childhood days, capsicum is a rare thing to find in our place. Also it used to be very expensive too. So whenever we get capsicum in our market, amma makes Capsicum bajji. After i got married and moved to chennai, capsicum used to be available in most of the shops at reasonable price. I was introduced to Capsicum Sambar by my mil. She loves capsicum and puts in aval upma, sambar.. The smell of capsicum sambar used to be so divine for me, i still enjoy making sambar with capsicum.
This sambar i made using yellow moong dal | paasi paruppu. Generally sambar is made using toor dal in our homes. Paasi paruppu sambar is made for Tiffin items like idli, dosa and pongal. Do give this sambar a try and let me know how it turned out.
Also check out my

Don't miss to check out the complete collection of No onion no garlic recipes. 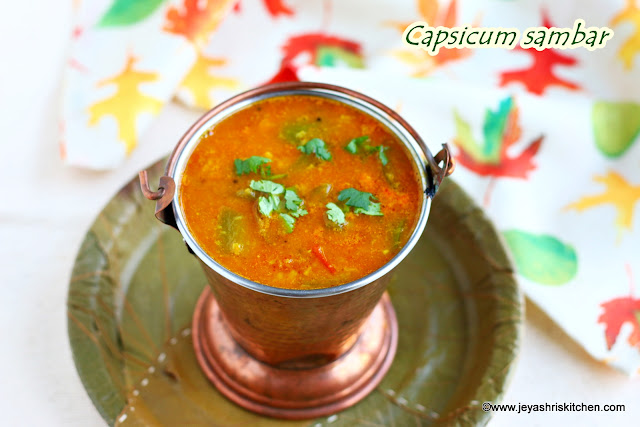 Bonda soup recipe| Urad dal bonda in moong soup, a popular Karnataka recipe, shared with step by step pictures. I tasted Bonda soup for the first time in a restaurant in Chennai. I loved the taste and wanted to make that at home one day. My friend who is a native of Karnataka passed the recipe to me few weeks back. As Bonda soup is a no onion no garlic recipe, i wanted to post it during this time. It is similar to our Tamil nadu Rasa vadai recipe. I made this during the weekend and it's a huge hit at home. I wanted to take the video but couldn't make it as i made this on  a weekend. Will try to upload when i do it next time. Do give this Bonda soup a  try, it's quite filling a and very tasty recipe. Check out my complete collection of No onion no garlic recipes. 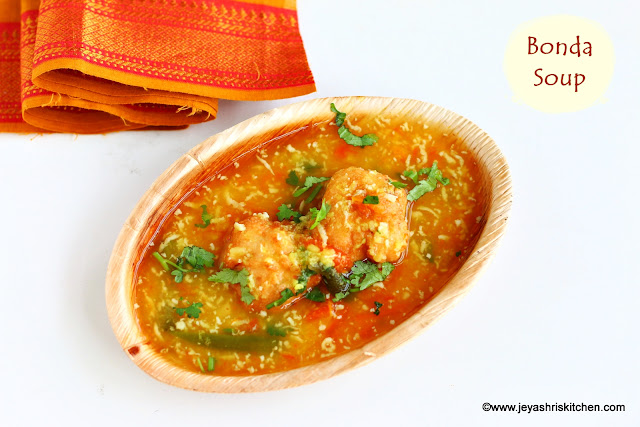 This week's Lunch menu is an Indo Chinese menu. Fried rice and Manchurian combo takes place rarely in my Kitchen, as personally i am not a fan of big fan of it. I was left with Paneer and a packet of baby corn in my refrigerator, so decided to go for this combo. To make it complete, i made fruit custard, one of my most favorite dessert. Right from the childhood, i love fruit custard. My mom makes this so often during mango season. Those days it was so rare and unique and so we look forward to this custard a lot. I happened to see some mango in the market yesterday, so wanted to include this in the menu. 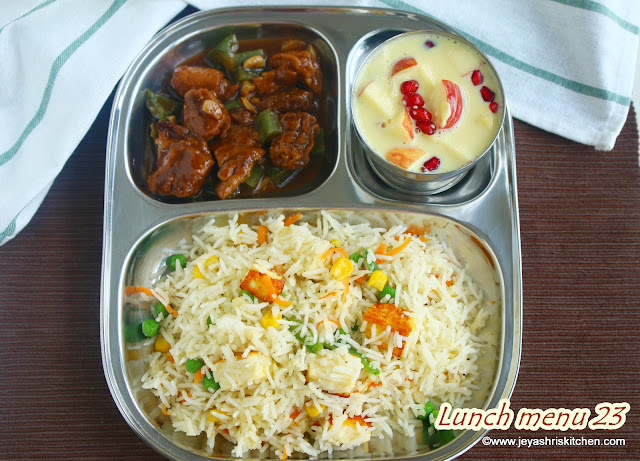 Read more »
By Jeyashris Kitchen at September 15, 2019 No comments:

Homemade Garlic naan on stove top, without yeast, a popular Indian flat bread, recipe with full video and step by step pictures. Garlic naan is loved by everyone at home. Though i have never attempted making this at home, i always love to give it a try. I have posted Plain kulcha recipe and a Homemade Peshwari naan, with yeast. I just followed my Kulcha recipe for this recipe, as it doesn't contains any yeast. But this tried using half portion of whole wheat flour and half portion of all purpose flour. I turned out really well and my son who is a fan of garlic naan, loved it very much.
We served this Garlic naan with Green peas masala. Though paneer masala or chole is the usual combo for naan, trust me, the green peas masala combo turned out so well. 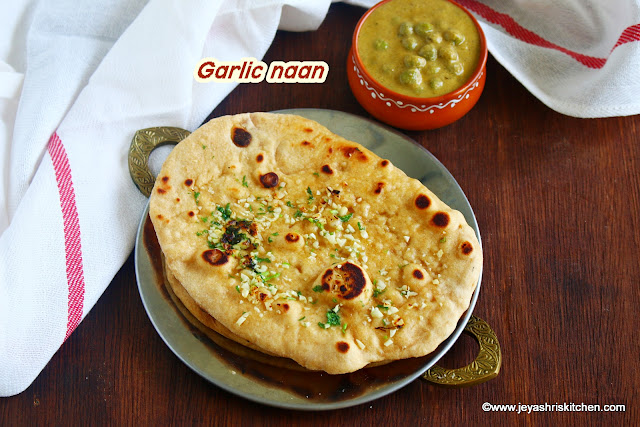 Read more »
By Jeyashris Kitchen at September 13, 2019 No comments:

Pottukadal vadai | Instant vadai recipe made using pottukadalai| chutney dal, easy to make crispy snack, recipe with full video and step by step pictures. Generally we make ulundu vadai or masala vadai by soaking dals and grinding it into a batter. This pottukadalai vadai is an instant one which doesn't needs any soaking, just grind the chutney dal and make the vadai. This is similar to the pattanam pakoda i posted some time back. If you have guests at home suddenly or if you crave for a deep fried snack on a rainy day evening, then this vadai is a perfect one for that.
Check out my 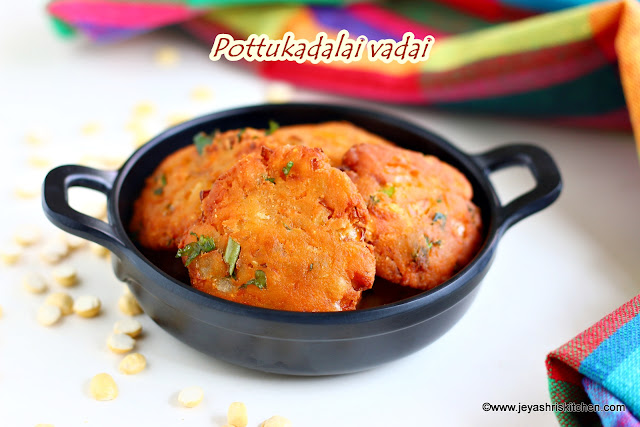 Most of the houses will cook Biryani for a Sundal lunch. I have already posted Paneer biyani meal. This week's menu comes with a family's favorite Hyderabadi style Veg Dum biryani. Few week's back when my son ordered Veg biryani in a restaurant, it came with raita and cauliflower pakoda. I really loved that combo and shared the same today in our Indian lunch menu. 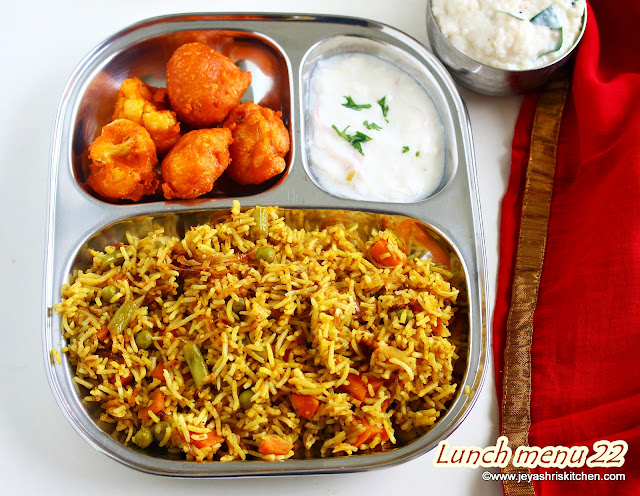 Read more »
By Jeyashris Kitchen at September 08, 2019 No comments:

Broccoli fritters, a simple and delicious snack recipe made using broccoli and other veggies, recipe with step by pictures and video. I got Preethi Zodiac Mixie, from Preethi kitchen appliances few months back. It comes with a Master chef jar which does a lot of function. Initially when i opened i was totally puzzled as how i am going to use all these facilities. But after few days i slowly got adjusted to it and now i can say, i am totally satisfied with the Master chef jar of Preethi zodiac Mixie. It does chopping, grating, kneading and slicing as well. It's quite useful for working women who always run out of time for chopping veggies. In this video, i will be showing the options available in the Master chef jar of Preethi zodiac. 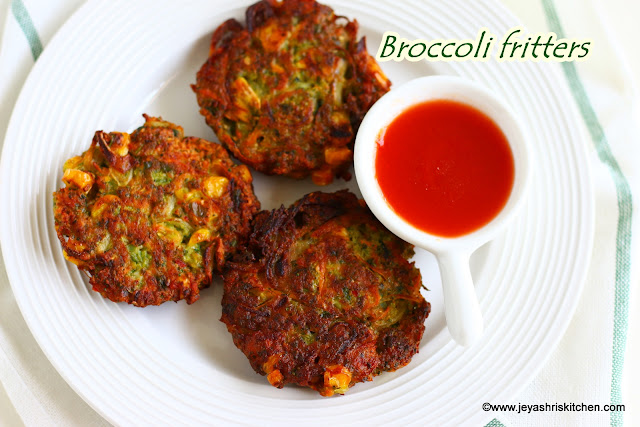 Read more »
By Jeyashris Kitchen at September 06, 2019 No comments:

Aloo paneer masala recipe, paneer and potato cooked in rich tomato based gravy, recipe with step by pictures and video. Paneer masala always goes well with chapati, naan and rotis. We generally make different varieties of paneer gravy such as Paneer butter masala, shahi paneer, paneer do pyaza... Recently during our Hong kong trip, we ordered food from a dhaba wala guy and tasted the combo of paneer and chole masala. I loved the idea of paneer with chole and rajma. I wanted to try the combo of aloo and paneer. The aloo paneer masala turned out so well and was a super hit at home too. We had with rotis, you can serve with kulchas or lachha paratha too.
Check out other interesting combos 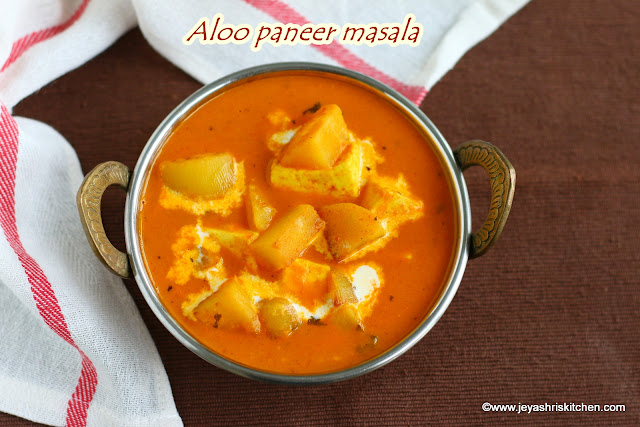 Read more »
By Jeyashris Kitchen at September 04, 2019 No comments:

Email ThisBlogThis!Share to TwitterShare to FacebookShare to Pinterest
Labels: Paneer Recipes, Side Dish for Roti

I planned to make a South Indian lunch for this week, but was running out of coconut and other stuff, so planned to make a North Indian platter with the available veggies. Jaipuri pulao, the rich veg pulao recipe, which is one of the popular recipe in Jeyashri's ktichen, paired with dhaba style dal, was a super hit combo at home. I have tried this methi missi roti for Jeyashri's kitchen mobile app. As i had methi leaves in the refrigerator, i wanted to make that too. 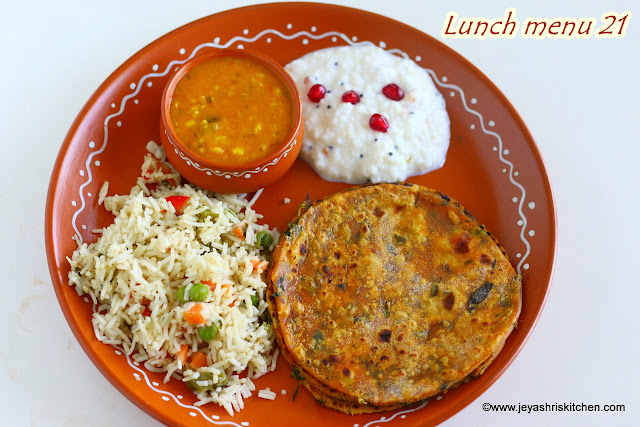 Read more »
By Jeyashris Kitchen at September 01, 2019 No comments: 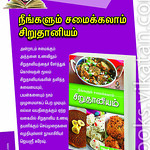 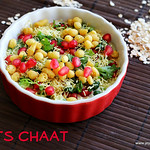 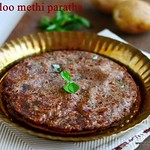 Welcome to my Kitchen. Jeyashri's Kitchen is authored by me, Jeyashri suresh, Scroll down to know more about me. My passion for cooking has started right from my school days being inspired by my grand mom and mom who cooks extremely well and many varieties of food too. The recipes on Jeyashri's Kitchen are mostly  are the ones which i learnt from my mom, mil and few from some cook books and other cooking websites. 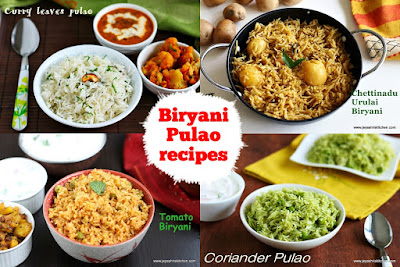 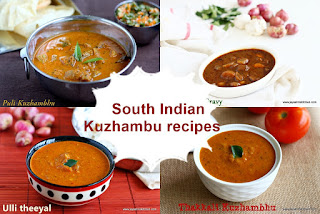 Side Dish for Roti 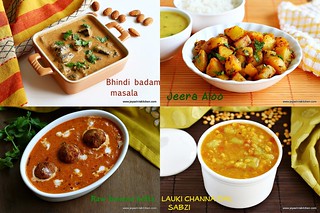 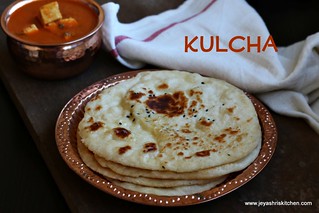 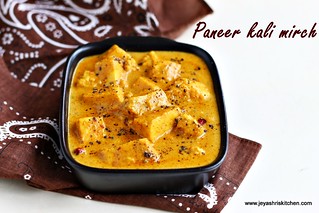